Port Blandford, NL…In what arguably could be considered to be ideal weather conditions for golf in Newfoundland and Labrador, the final round of the 2021 Royal LePage Provincial Amateur Championships provided an exciting round with ties, a double crown winner, and new Super Senior Champion.

Robbie Squires from Bally Haly Country Club and Jason Stagg of Humber Valley Resort T1 at the end of the three days of competition with a total of 229 and forced a playoff to decide the Provincial Amateur Champion. Stagg took the Amateur title on the second hole of the sudden victory playoff. C.J Nolan of Bally Haly capturing third position.

In the Mid-Amateur Division, it took another playoff between Stagg and Squires to decide the eventual winner with Squires winning the crown on the first hole. C.J. Nolan and Ryan Aucoin of Glendenning Golf T3 with a three-day total of 231. 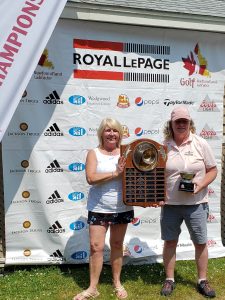 In the ladies Mid-Amateur Division, Kathleen Jean recorded an 86 for a total of 268 to repeat as champion with a 2-stroke victory over Janet Mills of Bally Haly who carded a final round 92, while Deborah Delaney of Glendenning Golf finished in third place with a three-day total of 278.and Kathleen Jean with identical two-day totals of 182. In the Senior Division, Jean repeated her 2019 win with Mills placing second and Bobbie Boland of Bally Haly capturing third place.

During the closing ceremonies, Golf NL acknowledged the volunteers who have given so freely of their time to make these championships a huge success and appreciation to the staff and management of the Terra Nova Resort for hosting the 2021 Royal LePage Provincial Amateur Championships and coordinating various functions.

It was announced that the 2022 Royal LePage Provincial Amateur Championships will be held at Bally Haly Country Club in St.John’s from July 10th to 13th.

Full results of the championship can be found on the following link: