Deer Lake, NL—After winning the 2019 provincial Juvenile championships, Ethan Efford of Bally Haly Country Club made a statement as he led wire to wire to capture the 2021 Royal LePage Provincial Junior Championship and the right to lead Team NL into the National Championships. Jack MacHardy of Grand Falls Golf Club captured his second provincial crown in style by leading the field in the Juvenile Division. Sam Fisher captured the Bantam Division while 10-year-old Freya Snook captured the Girls Junior crown.

Efford captured his first junior title recording a three-day total of 235 and a 3-stroke margin over Ryan Holwell, also from Bally Haly, who carded a final day 77 for a total of 238. Jacob Hatcher of Harmon Seaside Links rounded out the top three carding a final day 91.

In the Boys Juvenile Division, MacHardy recorded a final round 90 for a three-day total of 278 to capture the championship over Karsen Best of Bally Haly Country Club and Evan Snow of Gander, who tied for second with a three-day total of 286. Best took second place by virtue of a playoff.  In the Bantam Division, Fisher of Clovelly captured the title with a final round 88 and a 3-stroke win over James Mitchell of Grande Meadows Golf Club and Lucan Meade of Clovelly who posted identical three-day total of 275. Meade took second place with a sudden death one-hole playoff.

The talk of the tournament was the play of 10-year-old twin sisters Freya and Mila Snook. While Freya lead the Junior Division, her sister provided some exciting competition. In the end Freya built up a sizable lead in the first two days to hold off her sister and win the division by 1 stroke with a three-day total of 243. Sanjana Gullipalli of Clovelly placed third with a total of 273.

At the awards presentations, Golf NL took the opportunity thank the management of Humber River Golf Club for their support of the championships and acknowledged title sponsor Royal LePage and contributing partners Wedgwood Insurance, Pepsi, Taylormade, and adidas. 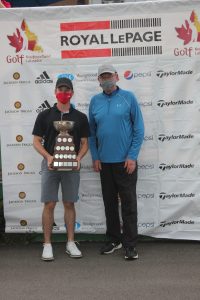 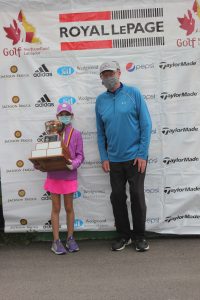 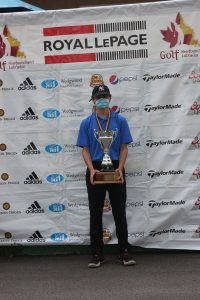