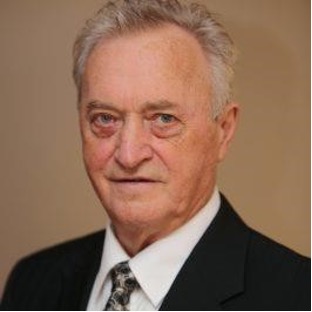 In 2004, a nine hole golf course on the Trinity Bay Shore was constructed in the town of Whiteway and was ready to open. With a membership of 67 individuals, this not for profit course needed a manager and by luck Ray Tuck was the perfect fit. After 11 years, the course now has a membership of over 100 players and averages 15,000 rounds per year. In the very near future the course will be debt free. This is a tremendous accomplishment for a manager who has had no prior experience at managing a golf course.

Ray was born in Hant’s Harbour, NL where he currently resides. He is married to the former Jean Tucker whom he say currently is a golf widow without the ‘er.’ They have three boys, Craig, Brian, and Peter and are blessed with a number of grandchildren. Ray graduated from Hant’s Harbour School in 1956 and continued his education by completing two years of study in the Education Department of Memorial University of NL in 1957.

He completed various other Accounting courses at Avalon College in 1990, Cabot College in 1993, and started CGA correspondence courses with The Certified General Accountants Association of Canada from 1993 onwards. He has participated in numerous continuing education courses and seminars throughout Canada and the US in the fields of seafood production, Labour relations, and marketing.

Having had no prior managerial golf course experience, Ray’s professional achievements have proven to be tremendous assets for his current position at Pitcher’s Pond. Ray is involved as a volunteer in a number of organizations, committees, and boards. There are too many to list here. Recently he was awarded the Volunteer of the Year by CBDC.

Over the years Ray has given freely of his time to be involved in the provincial and national golf community having served in a number pf capacities on the board of the former and present GNL boards and has been an active member of the NGCOA. To hieghten the expsoure and awraeness of the course Ray has attracted numerous evenst to teh course including the 2012 NL Summer Games and the 2015 Provincial Junior Championships. For 8 years Ray continued to involve Pitcher’s Pond in the Future Links Golf Program and the Take A Kid To The Course Program.

Ray Tuck is a gentle giant and a passionate supporter of golf in Newfoundland and Labrador. People who know Ray are very much aware that he is the driving force behind the success of golf in the TPC region. His friendly, inviting personality attracts golfers of all ages to come and play the game. His involvement will no doubt have long lasting benefits to golf in Newfoundland for years to come.