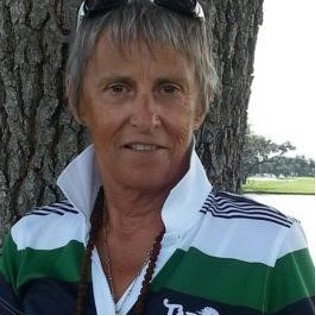 Born in Corner Brook, Jan’s golf started at 4 when her brother Bruce presented her with a cut-off club. She imitated his swing as well as her mother’s who was a competitive golfer at Blomidon and for whom Jan caddied when she was old enough to walk the course and drag the clubs.

At 13, the family moved to St. John’s and Jan was signed up as a junior at Bally Haly. Her first pro was Bobby Barr, whose Scottish teaching is the reason she is able to hit a knock-down shot in high winds to this day.

She won the Provincial Junior title 3 or 4 times between 1965 and 69, representing the Province at Nationals each year. Over the period of 1969 to 78 she won the Amateur title and again represented NL 4,5 or 6 times.

The mid 1970’s to 2001 saw Jan give up competitive golf while in pursuit of her career, family and travel, jokingly having said “I’ll take it up again when I can compete as a senior”.

From 2002 to 2006 she was on the Senior Provincial team having placed second each year until 2008 when she won not only the senior title but also the super-senior. This win ensured that Jan was the first female in the Province to win Junior, Amateur, Senior and Super Senior Provincial titles. She won the Senior and Super-senior again in 2014. Jan also represented NL at the newly created Atlantic Championships in 2014 and 15.

On her return to golf in 2002, Jan joined Clovelly Golf club where she won the Ladies Title 3 years running. Then she came back to her home course Bally Haly where she had won the Club Junior title 3 or 4 times in the 60’s. Over the years she has been Medal Play champion 8 times, Match Play champ 8 times, Senior champ twice, Super Senior champ twice, Sparkes Cup Mixed Play champ once, and Feder Cup champ three times. She has also been on many other winning interclub and intraclub teams. She has fond memories of winning the Bally Haly Invitational several times. Jan is also proud that her name is on the Shea and the McNamara Cups. Tessa Shea and Win McNamara were two women who greatly helped her in her junior career when they took her under their wings and introduced her to the very competitive and fun Catholics versus Protestants annual event where Jan evened the sides against the strong Catholic players like Shea, Murphy, and McNamara. Her love of fun and competitive golf started in those years.

As a Board member of Golf Newfoundland and Labrador, Jan has continued to show her interest in provincial golf, especially encouraging ladies and juniors.

2015 will be Jan’s last year playing serious competitive golf, although she has been seen playing her weekly recreational, very competitive games with her buddies.

2015 was a great season as Jan not only shot her career round of 75 but also hopes to be remembered for the quote “ Did I tell you about my first ever hole in One “ which was shot at that years Provincials on hole number 2 at Humber Valley Golf Resort.