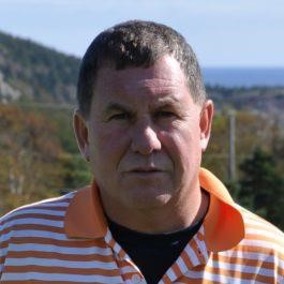 At the tender age of 13, Eddie Bearns began his golfing career at Pippy Park Golf Course. As a shy teenager, he did not venture far from this home club until 1980 when he traveled to Corner Brook to compete in his first Junior Provincial Tournament. This marked the beginning of a long and successful golfing career. Mr. Bearns finished third in this tournament, earning the right to represent Newfoundland and Labrador at the Canadian Junior Nationals for the first time. In 1987, Mr. Bearns joined Bally Haly and has been tweaking his competitive spirit there ever since.

Outside of provincial and national competitions, Mr. Bearns has attended a number of prestigious invitational events where he has represented Newfoundland and Labrador with pride. In 2004 and 2005 he was invited to the Barrett Invitational in St. Andrews, New Brunswick, which showcases the top amateur golfers in Eastern Canada and the United States, and in 2012 he was part of the Newfoundland team in the Maritime Cup competition.

Mr. Bearns is a great ambassador of golf in this province. He is well known for his participation in club events and has won numerous interclub tournaments and Men’s Club and Match Play Championships. In 2012, he even added a Mixed Club Championship to his resume. His love of the game is unquestionable and he is well known throughout the province, especially at Bally Haly, his participation in golf events.