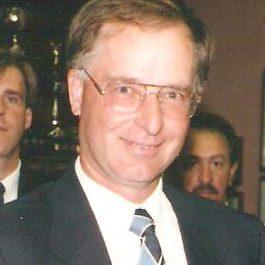 Bill Hryniw has excelled on the provincial golfing scene for over twenty years and during that period has been one of this province’s top performers in National competition. Mr. Hryniw moved to Newfoundland from Windsor, Ontario in October of 1973 and settled in St. John’s. He started golfing in this province at the Pippy Park public golf course in 1975. His first foray into provincial competition was in 1976 when he placed second in both NLGA qualifying tournaments for the Provincial Willingdon Cup Team to represent Newfoundland at the National Championship and the Willingdon Cup Teams Championship. It was at these competitions that Mr. Hryniw started a tradition of being this province’s lowest scorer in national competition. It was also the start of an NLGA record of a golfer qualifying for the provincial team for 12 consecutive years (1976-1987). In 1977, Mr. Hryniw joined the Bally Haly Golf & Curling Club and served as a member of the Golf Committee there. During his time at Bally Haly he has captured 17 club championships and numerous other club competitions. Among his many provincial and national titles include two-time champion of the Atantic Amateur Championship (1979, 1982), four-time champion of the Amateur Championships (1977, 1983, 1987, 1989) and four-time champion of the Provincial tournament (1978, 1979, 1982, 1985). In 1980, the Board of Governors of the Newfoundland and Labrador Golf Association presented him an Award of Excellence in recognition of being the first golfer in Newfoundland history to “make the cut” at the National Championship and to advance to the final two days of play. He was to repeat this tremendous feat 7 times. Never before, has a Newfoundland golfer finished this high in national competition.